Taking a Bite Out of Deer Aging

The age composition of a population can tell us a lot of useful information. In whitetail deer (Odocoileus virginianus), age data provides information about deer herd characteristics, harvest or mortality pressure on a specific age group, and general progress of a wildlife management program overall. A common way to age deer is through tooth wear and replacement. Let’s chew into this technique.

As a determined undergraduate, I voluntarily participated in a few of the DNR’s attempts to collect age and sex data of whitetail deer through in-person registration. Those data were collected from hunters pulling into the local gas station to show off (and ultimately register) their deer. Polite small talk was usually cut off by the sight of my clipboard, knife, flashlight, and jaw spreader. With a cheery smile I’d ask, “May we collect some information about the age and sex of your deer for management purposes?”. Most hunters gladly gave us the chance to examine their deer, but every now and then a trophy buck would pull in– and we knew better than to ask. Why? Because aging deer by tooth wear and replacement requires spreading (and sometimes cutting) the jaw and cheek to get a better look at the back teeth. In-person registration is no longer done, nowadays the DNR gets aging data from deer processors and CWD sampling.

Illustration of the sideview of a whitetail deer’s jaw and teeth. Credit: WIDNR

Although aging deer from tooth wear and replacement has its limitations, it is the quickest and cheapest way to determine the age of a deer. It requires determining which teeth are present in the jawbone and how worn those teeth are. The data determine which of the following age classes a deer falls into: fawn (younger than 1 year), yearling (1-1.5 years), or adult (categorized as 2, 3, 4-5, 6-8, 9-11, or 12+ years). 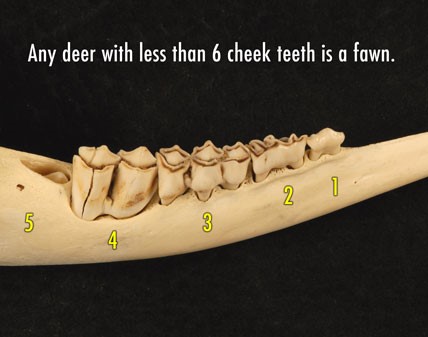 Image A. Example of a fawn’s teeth. Credit: Indiana DNR.

Yearlings are described as approximately 1.5 years old in the fall and generally have six fully erupted teeth on each side of the jaw. The third premolar is worn down by now but should still only have three cusps as it has not yet been replaced by a permanent tooth (Image B). 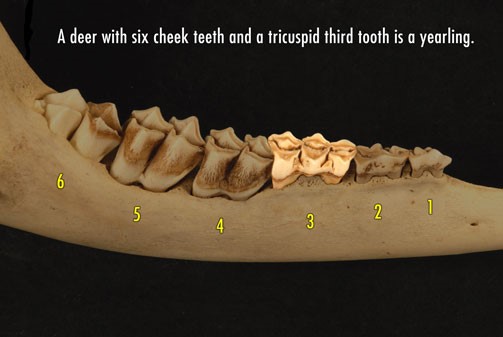 Image B. Example of a yearling’s teeth around 18 months. Credit: Indiana DNR.

At 18-19 months old the temporary premolars (first and second premolars) have been replaced by permanent premolars and the third premolar has now become permanent with only two cusps. A deer with six fully erupted teeth along the jaw is a yearling (Image C). 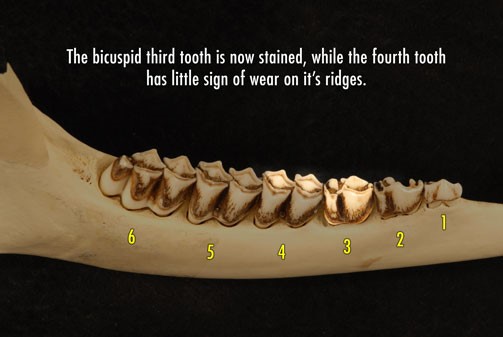 Adult deer are 2.5 years and older. They will have six fully erupted teeth along each side of the jaw: three permanent premolars and three permanent molars. At this point, it is no longer as simple as counting the teeth and cusps. It is going to take a sharp eye to observe the amount of tooth wear on the teeth. Over time, teeth wear down increasing the width of the dentin exposed along each cusp. Deer older than yearlings are aged through wear of the cusps closest to the tongue on the cheek teeth. For 2.5 years and older, the third premolar is stained. The fourth tooth shows little wear, having a distinct point, and the dentine is thinner than the white enamel. As the deer ages, the cusp points will be worn down and the teeth will become relatively flat (Image D). 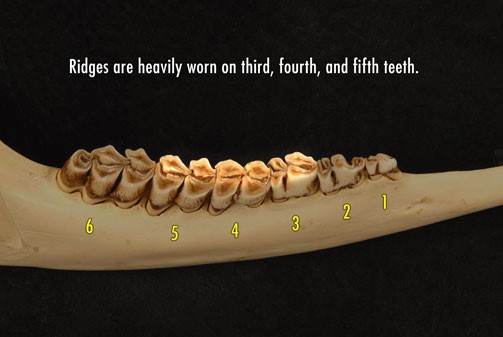 By no means am I an expert in aging deer. As you may now understand, learning how to age deer using tooth wear and replacement is not a one-day deal. Like everything, it takes practice. While we only took a bite out of deer aging, years of training and practice can allow researchers (and undergraduate volunteers) to age a deer down to the exact year. As mentioned, using tooth wear and replacement isn’t the most accurate technique for aging deer, but it is the most hands-on (and fun) approach.