The following piece was a collaboration between Sarah Cameron and Claire Viellieux. A summarized version was published in the Snapshot Wisconsin newsletter. To subscribe to the newsletter, visit this link.

Another species has joined the list of rarities captured on Snapshot Wisconsin trail cameras, a cougar from Waupaca County. The image was confirmed as containing a cougar by the Wisconsin DNR Wildlife Management team, who have confirmed other rare Snapshot Wisconsin species, including moose, American marten and whooping crane. 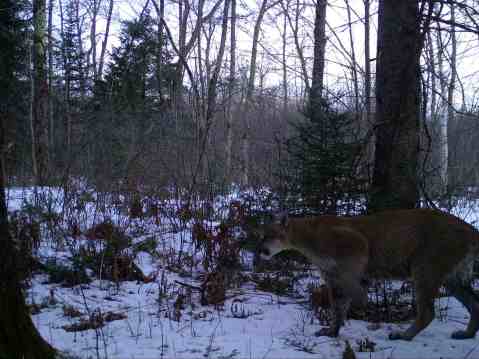 Cougars (also called mountain lions or pumas) are the largest species of wildcats in North America, with males weighing up to 160 lbs and standing roughly 30 inches tall at shoulder height. Their coats are often yellowish-brown while their belly, inside legs, and chin are white. Another distinguishing characteristic is the black tip at the end of their long tails.

Cougars once roamed the landscapes of Wisconsin and played a key role in the ecosystem as one of the few apex predators, but by 1910, cougar populations had disappeared from the state altogether. While there have been several verified sightings in recent years (with the majority identified as males), there is currently no evidence of a breeding population. Biologists believe that cougars spotted in Wisconsin belong to a breeding population from the Black Hills of South Dakota. That’s over 600 miles these felines have hiked in order to make it to Wisconsin!

This sighting brings Wisconsin’s number of confirmed cougars for this year to a total of three, with the other sightings being reported from trail cameras in Price and Portage Counties. Tom, who initially identified the cougar on this Snapshot Wisconsin trail camera, shared, “[I’m] glad to have been part of it and hope to find something interesting in front of my camera again in the future.”

To learn more about cougars in Wisconsin, check out this episode of the DNR’s Wild Wisconsin podcast.

Whether you are a Zooniverse volunteer or a trail camera host, please let us know if you see a rare species in a Snapshot Wisconsin photo. If you spot them in the wild or on a personal trail camera, report the observation using the Wisconsin large mammal observation form.