Falling Into Field Work in the Flambeau

The Snapshot Wisconsin team recently completed a second round of elk camera fieldwork in the Flambeau River State Forest. Below, Michael Kamp describes his field work experience along with his Snapshot teammate, Jamie Bugel.

The late morning sun was beginning to peek out as the Flambeau River glided serenely by. I watched downed maple leaves, their edges curled up, drifting down the river to unknown destinations. No boats traveled by this early fall morning. Taking one last look at the silent flow, Jamie and I walked back to our separate vehicles. Field work could not wait forever.

Nearby the Chippewa River. Photo by Ally Magnin.

After coasting down County Highway M, all the while on alert for crossing elk, we pulled off onto a gravel road. Shortly down the gravel road we parked in front of a gate to a walking trail. Stepping out of my vehicle, I gazed down the corridor of stunning fall colors. Auburn, golden, and rosy hues led the way to the site of our trail camera deployment. We strode down the path, following our GPS, towards the specific coordinates. A raven flew overhead cawing loudly – much throatier than its cousin the crow. Once we were within 20 meters, we veered off the treeless path to work our way through downed branches and a cluster of aspen trees. We selected a paper birch tree within a couple meters of the GPS point and positioned the trail camera facing north.

Next on the schedule was checking a trail camera down Lost Mile Road – a fitting name for such a lane far removed from town streets and city blocks. The sun now shone high above as the Subaru took the bumps and puddles of Lost Mile Road in rhythm. Once again, a metal gate impeded any vehicles hoping to pass, so Jamie and I continued on foot. This trail camera was further from the walking path, through swaying sandy brown grass and over the occasional muddy spot. A couple of eastern hemlocks, seemingly out of place in this open area, stood sentinel as we checked the trail camera. The batteries replaced and SD card in hand, we trekked back to our vehicles. 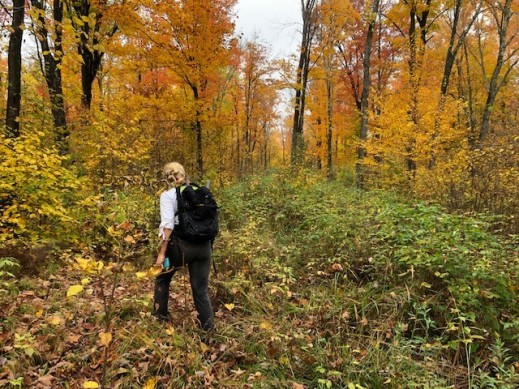 Using the bed of Jamie’s pickup truck as an impromptu table, we ate a pleasant lunch before heading to the following trail camera. We drove a short way as a light breeze swirled fallen leaves on and off the road. The trail camera lay a couple hundred meters south of this gravel way.  We headed into the woods, ducking under dense shrubbery and paused to marvel at a towering yellow birch tree. Maybe elk wandered beneath that tree’s branches in the late 1800’s before they were extirpated from the state. After reintroduction efforts and over 100 years later, the same tree might experience elk again. Moving on, we found the trail camera without much difficulty, lying just above a small marsh. Another trail camera checked.

Checking the last trail camera for the day passed in much the same manner – hiking quietly through the forest undisturbed by anyone else. Walking back from the trail camera, we lingered on the crest of a hill to observe the late afternoon sun. The brilliant rays pierced a forest opening and illuminated our surroundings in a golden glow. A photo could simply not do the scene justice. However, I can still picture that scene. Rather than a digital likeness, it is instead an enduring image etched in my mind’s eye.

When I think back to that sunny Friday during the tail end of September, I do not solely think about the trail cameras checked and data collected. I think about a day where Jamie and I had no cell service. There were no pings from our phones regarding news alerts or social media posts. There were no interruptions from the outside world. There was only a radio to call for help if needed. The gift of that day was we were truly present in the moment. That was the experience of fall in the Flambeau.

The gorgeous reds and browns of autumn are already beginning to seep across the state of Wisconsin. This month’s #SuperSnap features an equally gorgeous red fox hunting a small rodent.

A huge thanks to Zooniverse participant gardenmaeve for the #SuperSnap nomination!

Continue classifying photos on Zooniverse and hashtagging your favorites for a chance to be featured in the next #SuperSnap blog post. Check out all of the nominations by searching “#SuperSnap” on the Snapshot Wisconsin Talk boards.