As the pandemic continues to play a large role in all of our lives, many of us have experienced a wide range of emotions throughout 2020. Some people have leaned on their sense of humor as a way to deal with stress and to share a laugh with their friends and family. The Snapshot Wisconsin Team was inspired by the recent “Covid Calendar Reaction” meme, specifically this one created by the National Park Service. We’ve put together our own using the ever-expressive faces of the many deer caught on our trail cameras. We hope it gives you a smile today! 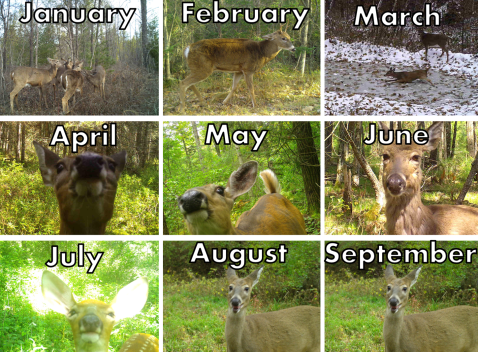 This month’s #SuperSnap features a tiny fawn taking shelter under its mother. This photo was taken in mid-May, so this fawn is likely only a few weeks old. It’s hard to believe that such a small creature will be nearly fully grown by next year! 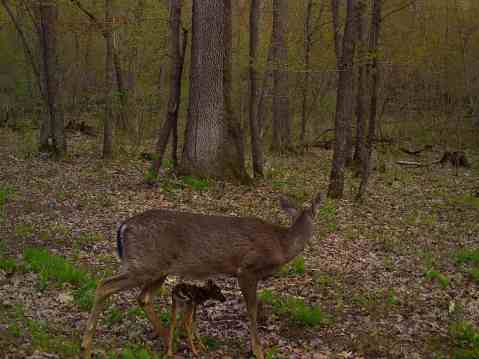 A huge thanks to Zooniverse participant RedJenn for the #SuperSnap nomination!

Continue classifying photos on Zooniverse and hashtagging your favorites for a chance to be featured in the next #SuperSnap blog post. Check out all of the nominations by searching “#SuperSnap” on the Snapshot Wisconsin Talk boards.

Snapshot Saturdays are a weekly feature on the Wisconsin Department of Natural Resource’s Facebook page. Give them a Like to keep up with recent DNR news and to view the weekly Snapshot Saturdays.

Did you know that antlers are one of the fastest growing animal tissues on the planet? Learn more by checking out 11 Facts About Antlers put together by the U.S. Fish & Wildlife Service!

Interested in hosting your own Snapshot Wisconsin camera? Visit our webpage to find out how to get involved: https://dnr.wi.gov/topic/research/projects/snapshot/.

One of the major Wildlife Management implications for Snapshot Wisconsin is the project’s contributions toward a system the DNR uses to calculate the size of the white-tail deer population in Wisconsin. Fawn-to-doe ratios, or FDRs, are found by dividing the number of does by the number of fawns seen during the summer months and are summarized by the (82) management units across the state.

In total, three programs contribute to FDR estimates: Snapshot Wisconsin, Operation Deer Watch, and the Summer Deer Observation Survey.  An advantage of incorporating Snapshot Wisconsin data in these estimates is that Snapshot cameras tend to be placed in secluded, natural areas, whereas the other two collection methods are opportunistic, meaning they’re biased toward counting deer seen near roadways.

Fawns and does may or may not be in the same photo to contribute to their respective averages. Defining a single camera-level average for each site drastically reduces the amount of data involved but ensures that the FDR is not skewed toward does, which tend to appear much more frequently on Snapshot cameras. 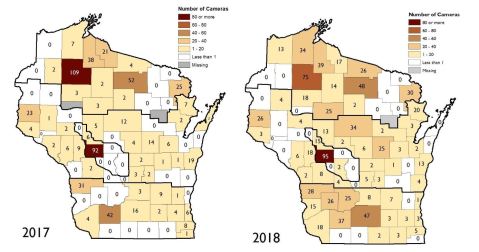 The above maps show the camera sites that contributed to FDR estimates in 2017 and in 2018. Photos from exclusively July and August were analyzed. A site only contributes to the estimate if there were at least 10 doe observations in one of the two months, but can be counted twice if it had at least 10 doe observations in both months. Statewide, 897 cameras contributed to 2018 FDR estimates, a 44% increase from the 622 sites that contributed in 2017.  Some deer management units decreased in sample size from 2017, but

Above are the results of the 2017 and 2018 FDR estimates using Snapshot Wisconsin data. Only deer management units with a minimum of 5 camera sites were included in the analysis. In 2018, the range of FDR was 0.75 – 1.2, which is an overall increase from the range of 0.62 – 1.13 in 2017. Snapshot Wisconsin was launched statewide in August 2018, meaning most cameras in the newly open counties were not deployed until after the data collection period. We expect that the number of cameras in the 2019 analysis will increase again, which would give us even more accurate estimates.

Is this animal albino?

From time to time, we find photos of animals with white coats that don’t typically have white coats. Are these animals albino? 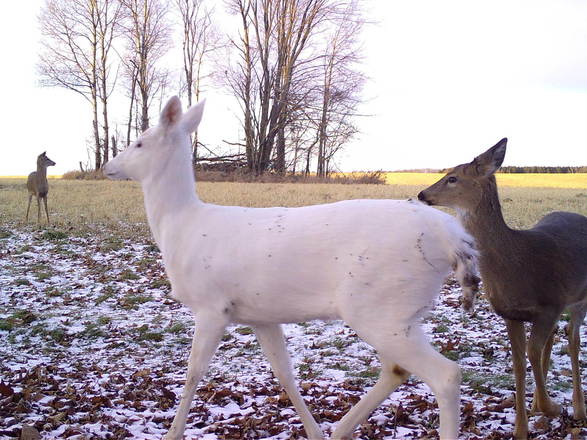 Albinism is caused by a genetic mutation whereby cells called melanocytes are “switched off” and fail to produce the pigment melanin. Melanin colors hair, skin, feathers, scales and eyes. Albinism can occur in any animal that has melanocytes, including mammals, reptiles, amphibians, birds and fish. Albino individuals may appear pure white, or may just be lighter overall than non-albino individuals.

Albinism is a rare condition, and there are several more common explanations for light coloration in animals. One is leucism, a condition caused by recessive genes that restrict the creation and/or distribution of pigment-making cells throughout the body during early development. Leucistic individuals may have light coloration overall, or they may have a light patch or patches scattered across the body.

Since either condition can result in individuals that appear white or very light in color, how can the casual observer tell the difference? It’s helpful to look at the eyes. Eye pupils normally look black because pigments at the back of the eye absorb light. In albino individuals unable to produce melanin, however, eyes appear red because light is reflected off blood vessels in the retina rather than being absorbed by pigment. This is why albino individuals experience a heightened sensitivity to light, and often some degree of blindness.  Since the melanocytes that produce eye color are not affected by leucism, leucistic individuals typically have normal eye color.

So, is the deer in the photo above albino or leucistic? Based on the dark eyes, it’s more likely leucistic.

White deer (albino or not) are protected from hunting in certain places, including Wisconsin. Why? White deer are not a special “breed” or subspecies, but they do hold social significance. People love seeing them, and some believe that they are good luck or magical. Certain areas of the state are now known for their white deer, and we are likely to keep spotting them on Snapshot Wisconsin cameras from time to time.

Is this deer sick?

Our Snapshot Wisconsin trail cameras capture images from all over the state and throughout the year.  Sometimes folks spot a critter that looks a bit different from the others and ask, “Is this deer sick?”  In most cases, the answer is “not likely.”  In this post we are sharing some of our most frequently asked questions about deer appearance and wildlife diseases. 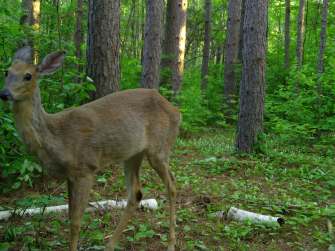 This deer looks skinny!  Is it sick?  Could it have CWD?

Winter in Wisconsin can be quite rough for a deer!  In summer food sources are abundant, but come wintertime deer have to rely on less nutritious forage like twigs, lichens, or leftovers in harvested crop fields. Because resources vary significantly with the season, a deer’s weight will also vary.  After particularly long winters, deer may look very skinny the following spring and even in to early summer.  But not to worry; they will put the weight back on in no time.

CWD (chronic wasting disease) is a fatal nervous system disease that affects deer, elk, and moose.  CWD has been found in wild deer in 23 Wisconsin counties, with highest prevalence in the southern part of the state. Clinical signs of CWD include diminished muscle tone and emaciation, but outward symptoms often do not appear for months or years after infection. The disease is best confirmed through a lab test for the disease; physical appearance based on trail camera images is not a reliable indicator.  More likely a deer is skinny because of poor food resources in winter and not because of CWD or some other disease.

What is wrong with this deer’s coat?

Each spring deer molt or lose their winter coats.  The thick grey hairs that make up the winter coat are replaced with a new reddish-brown summer coat.  This molting process can happen quite quickly and during the transition deer can look a little ratty and rough.  This is a normal process and nature’s way of making sure deer are “dressed” for the temperature.

This deer has an injury.  Can you notify someone or help this deer?

Sometimes deer with physical injuries show up in our photos.  This is common for wild animals. These injuries can be caused by any number of reasons, such as scraping against a fence or perhaps from a predator.  In many cases, the small injuries will heal quickly, leaving a scar or patch bare of hair.  In cases where the injury is major (say from a car collision) and the deer cannot recover, the animal will become an important food source for scavengers.

All of the photos appear on Zooniverse many months after they have been taken, and the animal may no longer be in the area.  Although reporting the observation via Zooniverse will not be helpful, Wisconsinites who personally observe sick or dead animals can make a timely report to their local DNR office or contact a licensed wildlife rehabilitator.

The following post is by a guest blogger, Caitlin Henning,  Communications Specialist at the Wisconsin Department of Natural Resources Office of Applied Science. Currently, her primary project is the WDNR’s landmark Southwest Wisconsin CWD, Deer & Predator Study. Thanks for the information on this project, Caitlin! END_OF_DOCUMENT_TOKEN_TO_BE_REPLACED