In wildlife conservation and management, population estimates are highly desired information and tracking them gives important insights about the health and resilience of a population through time. For example, Wisconsin Department of Natural Resources (WI DNR) annually estimates the size of the deer population in more than 80 Deer Management Units (roughly the size of counties). Fun fact – Snapshot Wisconsin contributes data on deer fawn-to-doe ratios to make these population estimates possible.

Examples of graphs showing stable, growing, and declining populations based on their lambda value. 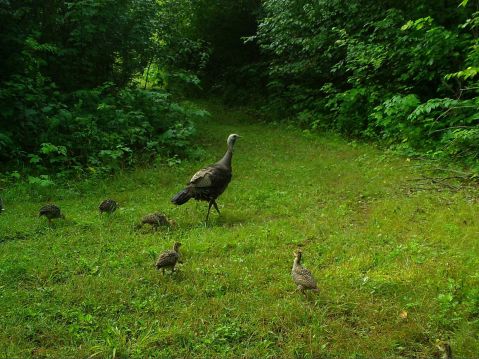 These young turkey poults would contribute to the number of “births” in a population estimate for turkeys.

This cottontail fell prey to a red fox. Animals that have died would contribute to the number of “deaths” in the population estimate for their species.

For deer, the birth part of the equation is captured by those fawn-to-doe ratios mentioned earlier, and the death portion is estimated as a combination of mortality sources. One source is deer harvest, and because Wisconsin requires registration of harvested deer, we have a pretty good understanding of this mortality source. Other mortality sources are from natural causes and are best assessed through radio-collaring and tracking deer through their lifetimes.

This deer is part of the WI DNR’s radio-collar tracking program.

Bobcat and fisher are two other Wisconsin species whose births and deaths are estimated annually. For these species, the recruitment into each population is estimated from our understanding of how many kittens (bobcat young) and kits (fisher young) are born into the population. The data come from the reproductive tracts of harvested females. The reproductive tracts contain scars for each placenta that was attached, thereby providing information on pregnancy rates and litter sizes. Similar to deer, information on mortality in these population comes from registered harvest and estimates of other non-harvest sources of mortality collected from radio-collaring research studies.

A bobcat with a WI DNR radio-collar. 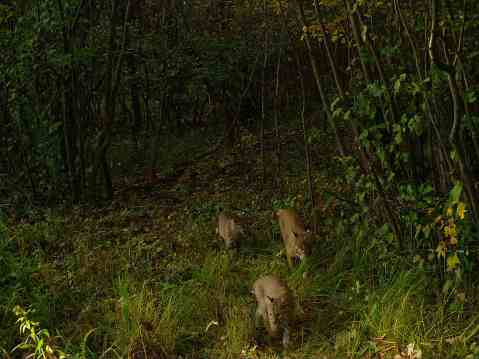 We are developing ways for Snapshot Wisconsin to contribute to our understanding of wildlife population dynamics. A real value of Snapshot Wisconsin is that it tracks all types of wildlife. For each species, we can develop metrics that will help us better track its population dynamics, and therefore gain a better understanding of the current status and trajectories of our wildlife populations.

One of these metrics is the proportion of cameras that capture a photo of a species within a time and spatial area. We can treat this metric as an index to population size, which is very useful for tracking populations across space and time. If we see a trend in the proportion of cameras in some part of the state showing an increase or decrease in this metric, that gives us information about the distribution and movement of species. For example, the southern border of fisher distribution in Wisconsin (currently around the center of the state) has been thought to be shifting further south. This metric can help us document when and where this shift may be occurring. This metric is now tracked for 19 Wisconsin species on the Snapshot Wisconsin data dashboard.

In the following graphics, you can see the proportion of trail cameras detecting bobcat in each ecological landscape of Wisconsin in 2017, 2018 and 2019. The patterns are consistent across these three years and show the distribution of bobcats is across two-thirds of the state. We will be tracking this metric and others for bobcats, as well as for other Wisconsin species.

The power of Snapshot Wisconsin is just beginning to emerge as we are collecting consistent, year-round, and multi-year data in this effort. Thanks to all of our volunteers who help make this possible!

Counts submitted by the public via Operation Deer Watch and by WDNR biologists are the primary data we use to calculate fawn-to-doe ratios. This information is very useful but somewhat biased, since observations are made during daylight hours and mainly along roadsides. Snapshot Wisconsin trail cameras give us a new way to count deer because the cameras operate all the time and are placed in more natural spaces.

In our first attempt to use Snapshot Wisconsin trail cameras to calculate fawn-to-doe ratios, we used Snapshot Wisconsin photos from August 2016 that were classified as deer by trail camera volunteers in Iowa and Sawyer Counties. There were 211 deer pictures from 13 cameras in Iowa County and 331 deer pictures from 13 cameras in Sawyer County. This is a very limited sample but it let us look for early patterns.

One thing was immediately obvious: we see the same does and fawns over and over again at each camera site. Before we could come up with any accurate estimates, we would have to account for repeated counts of the same deer. One method we tried was to use the maximum number of fawns and does seen in any single photo from each camera site. This leaves us with a much smaller number of deer observations at each site, but ensures that we do not over-count. When using this method, we end up with preliminary fawn-to-doe ratios between 0.7 and 1.0 that are close to what we would expect.

Stay tuned for more on fawn-to-doe ratios and other results as we continue to add photos and classifications!