The following piece was written by OAS Communications Assistant Claire VanValkenburg for the Snapshot Wisconsin newsletter. To subscribe to the newsletter, visit this link. 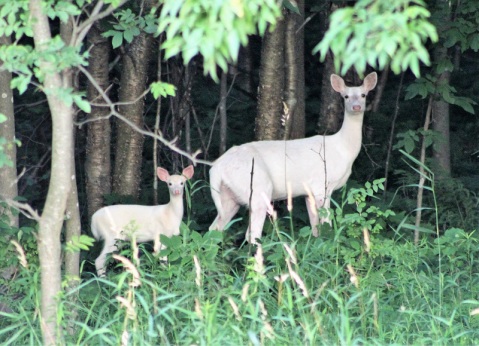 Although white-tailed deer are common in Wisconsin woods, we never seem to grow tired of pointing them out along the highway, watching them traverse our backyards and observing them on hikes. But as temperatures drop and snow falls, certain members of our herd will become harder to spot.

Al, a Vilas County trail camera host, recounts seeing one of these alabaster animals in 1994: “As we were sitting on the deck, a white deer appeared in the bright sunshine on the far side of the lake. It appeared to not only be white but glowing with a light from within, surrounded by the light green spring vegetation,” Al says.

Although seeing one can be striking, white deer are just like normal deer except for their fair coats. DNR researchers sampled the entire Snapshot Wisconsin dataset to piece together this map of where white deer were flagged using comments on MySnapshot and tagged photos on Zooniverse. They found that sightings occurred in 12 counties across the state, but were most frequent in central and northern Wisconsin.

A white deer’s coloring is caused by a lack of melanin in the deer’s skin, but they aren’t necessarily always albino. True albinism is extremely rare, and an albino deer would have pink eyes, ears, hooves, all-white fur and poor eyesight. It’s more likely that Wisconsin’s white deer population is mostly leucistic, which is caused by a recessive genetic trait found in about 1% of all white-tails.

Leucistic deer (commonly referred to as “piebald deer”) can have a variety of white, brown or black markings. Some leucistic deer are akin to pinto horses, while others may have a completely bleached coat with black hooves and noses. The trick to identifying a leucistic deer from an albino is in the eyes. Deer with pink eyes are most likely true albinos, whereas piebalds have gray, blue or black eyes because albinism affects eyes whereas leucism does not.

While differentiating the two may be tricky, the law is clear. According to page 21 of the 2019 Wisconsin DNR Deer Hunting Regulations, it is illegal to “possess albino or all-white deer which are entirely white except for the hooves, tarsal glands, head and parts of the head unless special written authorization is obtained from the department.” Currently, this is true in all areas of Wisconsin.

Nature photographer Jeff Richter came eye-to-eye with a white deer nearly two decades ago, and he’s been dedicated to capturing their beauty on camera ever since. Richter is the photographer of the book “White Deer: Ghosts of the Forests” by John Bates and told In Wisconsin Reporter Jo Garrett that despite the photographs, some people still believe they’re made up.

“We’ve actually had a couple of stores where clerks overheard people that’ve picked up the book and were looking at it and said, ‘Boy this is really neat, if only they were real,’” Richter said.

They’re real, alright. The one Al spotted all those years ago left a palpable impression on Al and his wife who, at the time, were looking to buy a house. They spotted the white deer across the lake when they were considering the purchase of what is now their current home.

“It actually may have had a small influence on the purchase of our home!” Al says.

Whether they’re common in your neck of the woods or not, white deer are striking animals. The stark contrast of their coats against Wisconsin woodlands makes them a pearly find among the herd. Keep your eyes peeled and your camera ready now, before they blend into a blanket of snow, perfectly hidden throughout the winter months.