Opossums – The Creatures You Didn’t Know Were Interesting.

One of the most incredible things about studying wildlife is that, no matter how much you think you know, something new and surprising will appear. Recently, I had the opportunity to review thousands of photos for an exciting project involving machine learning (which you can read more about in this blog post). A subset of the photos on my plate for review were of Virginia opossums (Didelphis virginiana).

An opossum caught on a Snapshot Wisconsin camera that appears to be carrying young in its pouch.

Some might not draw a line between the words “exciting project” and “opossum,” but they truly are an interesting species.  For starters, they are North America’s only marsupial, meaning females carry their offspring in a pouch, especially when the young are newly born (see the photo above).  Additionally, those of us who live where ticks are a concern can thank opossums for consuming a fair number of these pests. 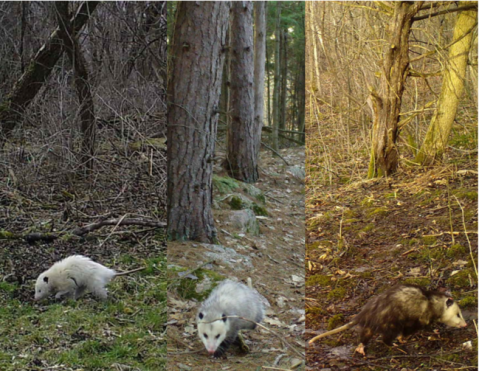 The first thing I learned about opossums from my time examining the photos is that they can vary widely in color.  Above is a small collage of opossums that range in color from almost entirely white (known as leucism) to predominantly dark grey, although the animal pictured in the middle is more representative of Wisconsin’s majority.

Morphology, or the set of physical characteristics an animal displays, is not easily disguised in trail camera photos when compared to something fleeting, like behavior.  Often, animals captured in the photos simply appear to be moving across the frame.  This expectation is what led me originally to overlook a fascinating opossum behavior.  As I flipped through the images, I noticed an infrared trigger in which the animal seemed to have debris stuck to its rear half.  I imagined that it had gotten stuck in mud, but when I saw the phenomenon a second time – this time in daylight – I realized that this was no accident.  In fact, these opossums were using their prehensile tails intentionally to carry bunches of leaves and twigs. 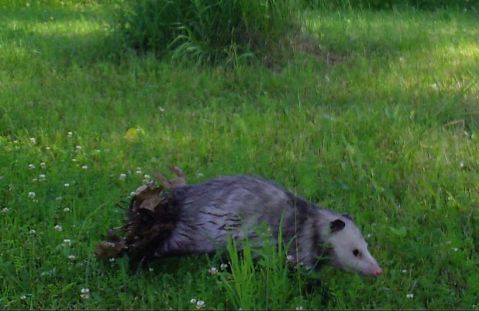 A Snapshot Wisconsin opossum using its prehensile tail to transport a collection of leaves and twigs.

After doing some research on this behavior, I discovered that this has been documented before, albeit rarely.  The consensus on the reason for this behavior is that opossums take their hauls to a temporary den site to use as bedding material.  Of the over 3,000 opossum triggers that I was sorting, I only encountered nine in which this behavior was displayed.  If I were to randomly choose a photo from the set, I would be more than twice as likely to encounter a raccoon misclassified as an opossum than I would be to have selected a photo of an opossum carrying leaves with its tail.  Nine instances do not constitute a large enough sample size to do any major analyses.  However, according to this photo set, there does not seem to be any obvious seasonality, with photos spread somewhat evenly from January 2017 through June 2018.  Only one trigger was taken during the daytime – likely a product of opossums being primarily nocturnal.

If you stumble upon any interesting Snapshot photos – opossums or otherwise – please reach out to us.  You can share them by using the “Talk” function on Zooniverse or by emailing them to DNRSnapshotWisconsin@wisconsin.gov.

2 responses to “Opossums – The Creatures You Didn’t Know Were Interesting.”