As many volunteers may be aware, Snapshot Wisconsin operates continuously and year-round. This is distinct from many other studies and monitoring efforts focused upon wildlife that typically evaluate population status during a particular time of year and look at changes between years. One belief that underpins Snapshot Wisconsin is that because the environment consistently changes across the year, how animals move, behave, live, die also changes. Consistent and continuous data collection provides the project much richer insights into animal habitat associations, and it also gives the project the ability to evaluate which time of year deserves most focus–when should we be monitoring things?

As discussed in previous posts, we heavily rely on spatial data produced by processing satellite imagery in order to quantify species’ habitats and estimate or predict where animals are. Recall that two important sensors or satellites are Landsat, which has fine spatial resolution but captures imagery of Wisconsin less frequently, and Modis (on the Aqua and Terra Satellites) that has coarser spatial resolution, but captures an image of Wisconsin daily. Data produced from Modis imagery is incredibly useful for capturing, say, the timing of larger scale phenomena like big snow events, or the onset of either long-term snow coverage in the winter or green up in the spring. The behaviors and activity of animal species are often connected to the timing of these environmental cues (or others, like temperature, or the length of daylight).

One animal species that is particularly sensitive to seasonality is the black bear: bears spend the winter in dens in a state of torpor. In brown bears, previous research has suggested that the timing of bear den entry is sensitive to environmental factors, while the timing of ending torpor is more related to individual physiology. One thing we are interested in is whether bear behavior (out and about, or in torpor) exhibits any correlation with the variation in the timing of plant green-up and senescence across space, and whether “mismatch” between when bears exit dens and when plants green up (plants like sedges are an important food source for bears early in the year) seems to have any population consequences. 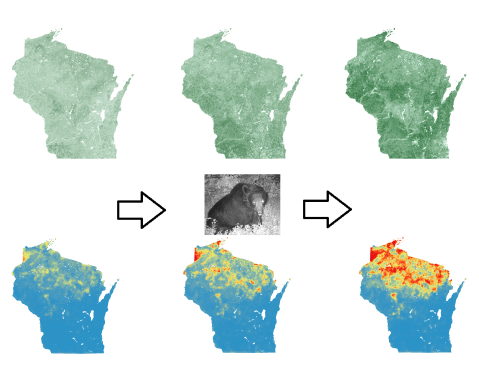 While Wisconsin vegetation greens up from late winter to mid-summer, bears also become increasingly present across the landscape.

BUT…..while satellite imagery provides an excellent overhead synopsis of plant activity, it is not always clear which plants are making the image green. Bears–and many other animal species–primarily eat green matter at ground level rather than leaves at the tops of trees. Snapshot Wisconsin’s cameras provide a ground view that we can relate to satellite images to get a sense of what airborne imagery is responding to.  In the long term, this will allow improved estimates of where animals are and at what time.