The following post is by a guest blogger, Joe Dittrich,  research scientist at the Wisconsin Department of Natural Resources. Joe was involved in the new elk reintroduction in the Flambeau River State Forest (Sawyer County) and shares the experience here. Thanks Joe!

During the third year of Wisconsin’s elk reintroduction efforts, DNR staff, in partnership with Kentucky Department of Fish and Wildlife Resources staff, trapped and quarantined 29 elk in eastern Kentucky during January and early February. Following approximately the first 45 days of the required 120-day quarantine and health testing period, the animals were transported to a seven acre holding pen within their new home in the Flambeau River State Forest this spring.

Prior to release, the elk must complete the full 120-day quarantine, undergo health testing for tuberculosis, and be fitted with a GPS collar, all while under 24 hour care and monitoring. The holding pen is a fenced area that is roughly diamond shaped and divided into three separate compartments. Holding pen compartments include a number of divider doors that can be opened or closed to control animal movement. One end of the holding pen is wooded which provides the elk shade and cover while the end that abuts the processing facility is narrower and grassy. The elk need to be moved from their enclosure into this facility for health testing and collaring.

Elk Drive – Elk being moved from one compartment of the holding pen into the processing facility (toward photographer). Note the Elk Health Testing Team member in the left of the photo.

Elk are moved from the enclosure into the processing facility using a process similar to a deer drive. Members of the Elk Health Testing Team line up and slowly walk through the enclosure which causes the elk to move toward and into the building.
The facility layout is specifically designed for elk. Elk enter the building into a main holding area connected to an alleyway. The alleyway system is basically a corridor which can be divided into separate compartments by sliding doors open or closed. The second to last compartment contains a scale which weighs the animal and then it is on to the hydraulic chute. 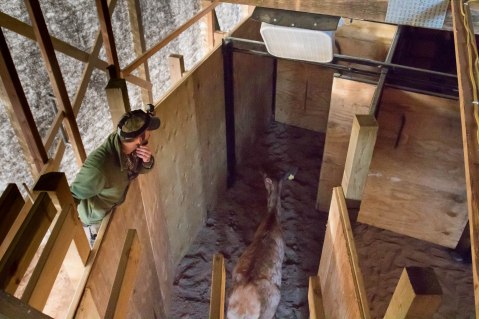 An individual elk being moved from the main holding area into compartment one of the alleyway.

The hydraulic chute lifts and holds the elk still and slightly off the ground. For human and elk safety it is necessary to restrain the elk with this equipment in order to complete health testing and collaring. A similar process is used by cattle operations to hold animals still for inspection, vaccination, etc. Once an elk is secured in the chute a blindfold is placed over its eyes to help calm it down. Next, the veterinarian(s) analyze the tuberculosis skin test site to determine if the animal had a reaction, which would require additional screening. As has been the case during each of the three years of Wisconsin’s most recent elk translocation effort, these elk were given a clean bill of health!

Then, a GPS collar is placed on the animal with special care taken to size the collar so that it will not come off but will also be large enough to fit well when the animal is full grown. In addition to providing location data, each collar has a unique number written on it which allows identification of individual animals captured in trail camera photos. The collar numbers will be used in conjunction with a Snapshot Wisconsin trail camera grid and GPS location data to monitor the population. These data will be used by biologists and researchers to help answer questions relating to survival, habitat use, and calving locations, to name just a few of the important functions of these data.

A bull elk in the hydraulic chute prior to GPS collaring.

Finally, the blindfold is removed, chute relaxed, and the door is opened to allow the animal to return to the holding pen. In a matter of weeks these elk will be released and join other elk to make up the greater Clam Lake herd that was first established in 1995. For more information about the Wisconsin elk reintroduction, visit www.dnr.wi.gov and use key word “elk reintroduction”.