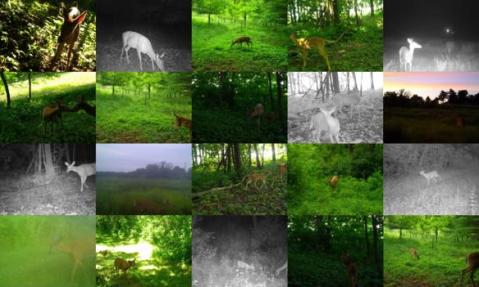 Counts submitted by the public via Operation Deer Watch and by WDNR biologists are the primary data we use to calculate fawn-to-doe ratios. This information is very useful but somewhat biased, since observations are made during daylight hours and mainly along roadsides. Snapshot Wisconsin trail cameras give us a new way to count deer because the cameras operate all the time and are placed in more natural spaces.

In our first attempt to use Snapshot Wisconsin trail cameras to calculate fawn-to-doe ratios, we used Snapshot Wisconsin photos from August 2016 that were classified as deer by trail camera volunteers in Iowa and Sawyer Counties. There were 211 deer pictures from 13 cameras in Iowa County and 331 deer pictures from 13 cameras in Sawyer County. This is a very limited sample but it let us look for early patterns.

One thing was immediately obvious: we see the same does and fawns over and over again at each camera site. Before we could come up with any accurate estimates, we would have to account for repeated counts of the same deer. One method we tried was to use the maximum number of fawns and does seen in any single photo from each camera site. This leaves us with a much smaller number of deer observations at each site, but ensures that we do not over-count. When using this method, we end up with preliminary fawn-to-doe ratios between 0.7 and 1.0 that are close to what we would expect.

Stay tuned for more on fawn-to-doe ratios and other results as we continue to add photos and classifications!